Having an ear to the ground in Punjab 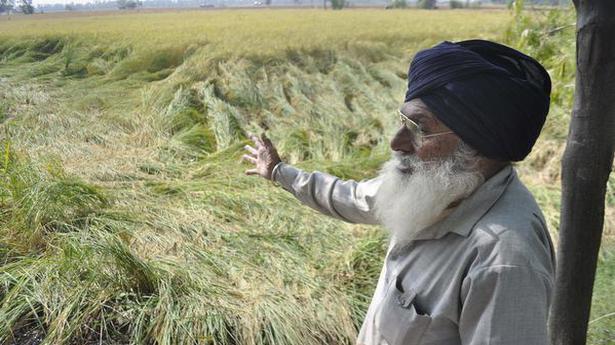 Amid burning social issues, the farm laws repeal may not aid the BJP, while the Congress and AAP are in a tight contest

Punjab is restless. It is in pain. It feels let down by the State’s politics, its leaders and political parties. A sense of its political alienation from Delhi is palpable. It desperately wants to trust somebody. It is looking for that somebody. Perhaps it also knows, at the back of its mind, that there is hardly anybody it can depend on. And that finally, when the time comes, it has to choose a political platform that is less undependable, and unwillingly settle for it for the next five years. Price rise, drug menace, joblessness, farm laws, fall in incomes, increase in thefts, lawlessness, insult to sacred text cause anguish to its people. What is more painful to them is the perception that its political leaders and successive governments are indifferent to these issues. There is hopelessness in the young of the State. Even in tiny villages, the walls have the screaming advertisements of agencies that offer visa and immigration help to Canada and Australia. So too for institutes that coach students for the International English Language Testing System (IELTS) tests.

A few short months before the elections to the State Assembly, this is the mood of the State that I gathered after a 10-day intensive tour. I clocked about 2,000 kilometres, traversing the three main regions of the State — Malwa, Doaba and Majha. I met over 500 people representing almost all sections of society: men and women, in villages and towns, the rich and the poor, the young and the old, farmers, labourers, the unemployed, students, employees. Some individually and some in small groups. They were all surprisingly forthcoming in expressing their views and generous with their time. I also had long conversations with academics in universities and research institutes. I deliberately avoided meeting political party leaders.

On the morning of the last day of my travel came the unexpected announcement by the Prime Minister declaring his intention to repeal the three farm laws. The immediate reaction of the man on the street was one of jubilation. However, I could not find signs of an abatement of anger against the Prime Minister, his party, and the Union government.

In Punjab, the repeal announcement is unlikely to fetch the Bharatiya Janata Party (BJP) political dividends. The anger is intense; the wound, raw. In many conversations the Prime Minister was referred to less than respectably. The recent reopening of the Kartarpur Sahib Corridor has not generated the kind of goodwill the State BJP leadership has expected. As things stand today, the BJP has little or no chance of being in the reckoning in the coming elections.

The Shiromani Akali Dal is viewed with suspicion because of its association with the BJP. The Akali Dal’s quitting the National Democratic Alliance over farm laws has not helped the party recover its lost political ground. Its panthic support base too is unhappy on account of the party’s inaction in the case of tearing off pages from the holy book, the incident known as Bargari Kand. The Akali Dal government did not bring the culprits to book. Instead it is seen as the government that fired on those who protested against the desecration. A large number of devout Sikhs are yet to forgive the party for the deaths of two people in the firing. Many who voted for the Akali Dal in the last Assembly elections intend to move away from it this time. There is a strong indication of a further erosion of its support base. Those who intend to remain with it lack passion and continue to extend support without enthusiasm.

There is a widespread feeling that the Congress government under Captain Amarinder Singh did not deliver on its promises. Two things are held against the former Chief Minister. First, that he did not fulfil the promise he made to curb the menace of drugs. The fact that soon after he took office, he swore on the Gutka Sahib, the Sikh holy book, to assure the people that he would eliminate the drug menace and yet failed to take resolute action has earned him the wrath of the public. Second, he is seen as an inaccessible leader. Punjab is in no mood to indulge the Maharaja this time. Association with him adds no political value to the BJP even after the repeal of the three farm laws. Punjab refuses to see the Union government’s climbdown on the farm laws as anything but a victory for the agitation. And surely not as the Prime Minister’s generosity or an outcome of Captain Amarinder Singh’s pressure on the Union government. In the event, the yet-to-be-registered political party of the former Chief Minister is likely to be stillborn.

The recent significant political development in Punjab is the replacement of Captain Amarinder Singh with Charanjit Singh Channi as the Chief Minister. The move, undoubtedly, has implications for the electoral fortunes of the Congress. By extension, it also is likely to impact the prospects of the Aam Aadmi Party (AAP). Until the change of guard, AAP has seen a huge surge in support. The State was disillusioned with the Congress government under Captain Amarinder Singh. In fact, the opinion that the Captain, the top leadership of the Akalis and the BJP’s central leadership are working in league has gained ground. Therefore, the Congress under Amarinder Singh was seen to be as unelectable as the Akali Dal and the BJP are. The sections who preferred the Congress to the Akali-BJP combine in the last polls began their shift to AAP. They wanted to give the untested party a try. That accounts for the massive surge in AAP’s support before the new Chief Minister, Mr. Channi, took over. With the change of guard, however, those sections are having second thoughts. It is evident that some of those sections are on their way back to the Congress.

The change of guard manoeuvre has blunted the sharp edge of anti-incumbency to some extent. There is one remarkable thing in the political conversation in Punjab. Mr. Channi has managed to become a household name in a short time. He being the first Dalit Chief Minister of the State lends a social dimension to the discourse. People are prepared to watch him. They seem to have reserved their judgment about him and the Congress. The extent of damage the running battle between the Chief Minister and his State party chief can cause is yet unclear. But that it will cause damage is certain.

The biggest loser as a result of the Congress party’s repositioning is AAP. There is a lot of goodwill for the party at present among all sections of Punjab society. It is more pronounced among the young and first-time voters. It is able to attract erstwhile voters of both the Akali Dal and the Congress. Many women in remote villages too said they wanted to give the new party a chance. However, AAP lacks organisation, cadre, and recognisable faces in many constituencies. Some people see it as a party with roots outside the State. Its biggest handicap, however, is its procrastination over announcing the Chief Minister face.

Electorally, the Congress and AAP are in a tight contest, with a slight edge for the ruling Congress at the moment. The one who commits less errors will have more chances of winning. However, mistakes of AAP and the Congress do not have equal potential for damage. AAP’s mistakes are likely to be less damaging to it. Whereas even small mistakes by the Congress can drastically swing the mood of the State in favour of AAP which is seen as an alternative that deserves a chance. When they return home from the agitation, the mood of Punjab’s highly networked and well-informed farmers can be a clincher.

Parakala Prabhakar is former Communications Adviser to the Government of Andhra Pradesh and is Managing Director of RightFOLIO, a knowledge enterprise based in Hyderabad